Topsides removal a significant milestone in decommissioning of Dunlin Alpha 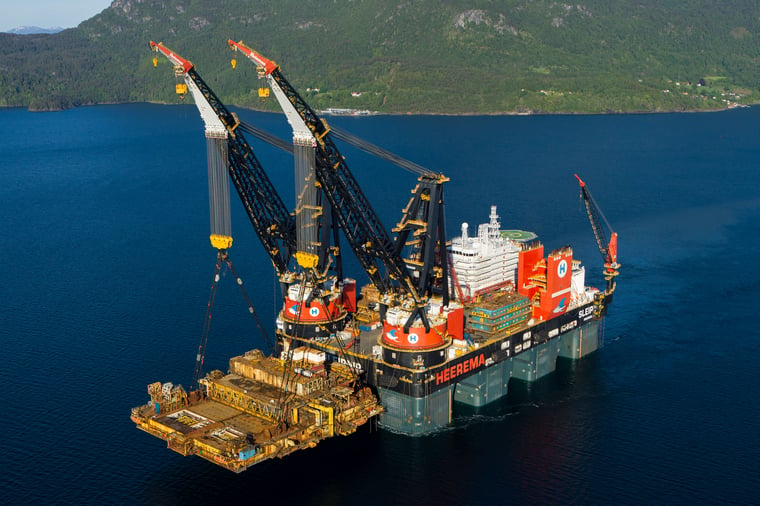 It is the end of an era with the removal of the topsides from Fairfield Energy’s Dunlin Alpha. Heerema Marine Contractors and AF Offshore Decom operating as the HAF Consortium safely removed around 19,000 metric tons over two campaigns to successfully deliver the platform for reuse and recycling.

The offshore operations started in early April, with Thialf and the Heerema and AF Offshore Decom teams executing hook down and preparatory activities. Thialf removed around 3,500 metric tons of modules to its deck and transported these to the AF Offshore Decom Environmental Base at Vats, Norway. The hook down activities were optimized to maximize the final lifting weight of the Module Support Frame (MSF) to fully utilize Sleipnir’s lifting capacity.

After the successful hook down, Sleipnir returned to the field on May 31 and transferred five modules weighing around 3,500 metric tons in total to its deck. Thereafter, the MSF rigging was prepared, weighing in at almost 550 metric tons, and connected to the purpose-built pre-installed lift points. As the MSF was initially installed using a floatover method this was the first time the structure was lifted. In an industry first, Sleipnir then removed the 11,750 metric ton MSF in a single lift before transferring it to quayside suspended in the vessel’s cranes.

Ewout Bastian, Heerema Senior Project Manager: ‘We are proud to have delivered two successful campaigns to remove the Dunlin Alpha platform safely and ahead of schedule. This achievement is the result of our excellent partnership with AF Offshore Decom and our close cooperation with our client Fairfield Energy.

In total, Sleipnir removed 15,500 metric tons and installed a NavAid in less than 60 hours. Now, that the Dunlin Alpha platform has been delivered to AF Offshore Decom’s Environmental Base it will be reused or recycled more than 95%.'

Lars Myhre Hjelmeset, AF Offshore Decom’s Managing Director: ‘AF Offshore Decom is proud to have played an integral role with its partner Heerema, in the offshore removals campaigns for the Dunlin Alpha which has now been successfully completed, firstly with Thialf in April, with the final lifting campaign performed by Sleipnir in June.

All modules have now been safely offloaded at AF Offshore Decom’s world-leading recycling facility in Vats, and from this point, more than 95% of the Dunlin Topsides will be recycled and reused. In a world where resources are finite and the earth’s ability to absorb carbon emissions has been depleted, the future rests on our ability to recycle and reuse resources and materials. This is our commitment. We would like to thank our client Fairfield Energy, and consortium partner Heerema, for the excellent cooperation offshore.’

The Dunlin Alpha installation, located approximately 137 km northeast of Shetland and in a water depth of 151 m, produced its first oil in 1978. In the 37 years that followed, more than 522 million barrels of oil were recovered from the Greater Dunlin Area, comprising the Dunlin, Dunlin S/W, Osprey, and Merlin fields. Fairfield Energy acquired the assets in 2008 and took over full operatorship in 2014, maximizing production during its late-life stage and then progressing its subsequent decommissioning programs.

Alan Scott, General Manager for the Greater Dunlin Area Decommissioning Project said: 'This is a poignant milestone for an installation which has been a central part of UK North Sea production since the industry’s earlier days. Notably, in 1978 it was the first field to produce into the Sullom Voe Terminal on Shetland, paving the way for the many that came after.

“The Greater Dunlin Area itself has made its mark but it’s important not to forget the thousands of people who have visited or called the platform their working home. Dunlin has always been blessed with a strong team spirit and this is another core part of its legacy, having influenced the careers of many across the industry. I’d like to thank everyone who has been involved with Dunlin over the years, helping the asset overcome any challenges and achieve its many successes.'