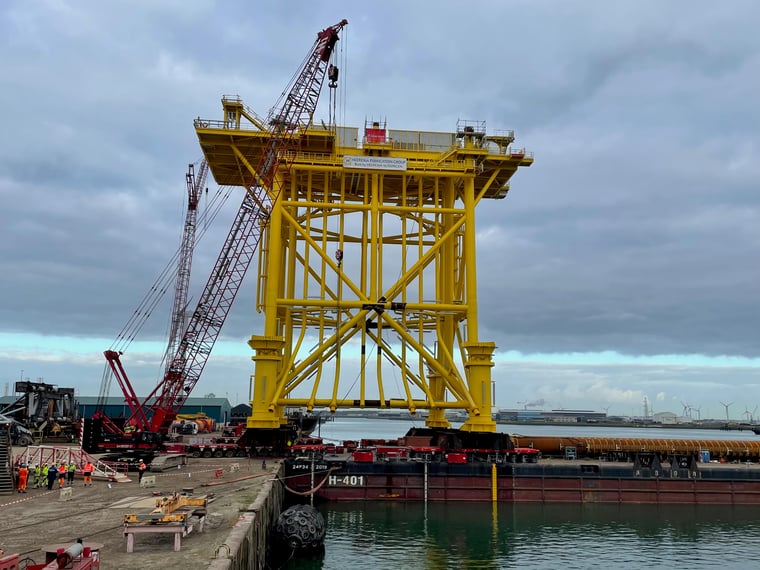 The load-out of the jacket for TenneT's offshore platform Hollandse Kust (north) has been successfully completed in the Port of Vlissingen. The construction of about 2,100 metric tons was safely brought onboard a pontoon from the yard of Heerema Fabrication Group by load-out specialist Mammoet.

With self-propelled transporters under the piles, Mammoet moved the jacket some 150 meters towards the quay on Friday afternoon. On Saturday morning, the team waited until the deck of the pontoon was as high as the quay due to the tide. Then the 45-meter high jacket was driven onboard and around noon the contractor started securing the cargo. 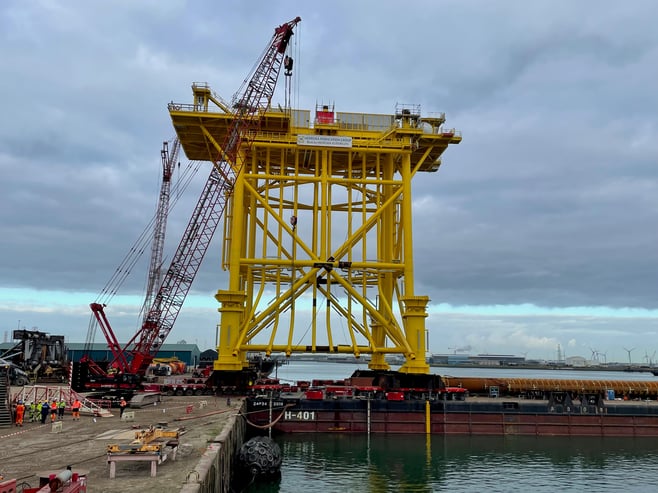 Following the successful load-out, after ten months from the start of construction, the jacket is as good as ready for transport to its final location. The sail away is planned for the end of October, after which the jacket will be positioned more than 18 kilometers off the coast of Egmond.

Next year the contractor combination will place the topside for Hollandse Kust (north) on the undercarriage and the platform will be ready in 2023. From that moment on TenneT will bring 700 MW of wind energy ashore with this 'plug socket at sea.' The jacket was designed on the drawing board in such a way that, with regular maintenance, it will have a minimum lifespan of 40 years.

Following the tender for the construction and installation of the offshore transformer station Hollandse Kust (north), the combination EQUANS (formerly ENGIE Fabricom)/Iemants also signed the contract for (west Alpha) last year. "The assembly hall at Heerema is already starting to fill up with the prefab parts for west Alpha. We will now get to work on them", says Guus Siteur, project lead for the Hollandse Kust (north) and (west Alpha) platforms on behalf of TenneT.

According to Siteur, the Transmission System Operator is very satisfied with the cooperation with EQUANS/Iemants as main contractor and Heerema Vlissingen B.V. as subcontractor. "This successful cooperation has resulted in the jacket, manufactured according to strict quality requirements, being built in Vlissingen in less than a year. A great achievement."